A Tweet from Cheaper Than Dirt advertising their 30-round magazines for the HK 91/G3 reminded me that I have at least 100 G3 magazines (20-rounders) and don’t even own a HK 91/G3/PTR-91! I’m sure I am not alone in owning magazines for firearms that I don’t currently own. 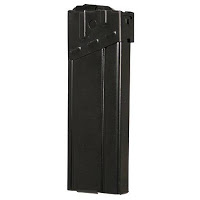 I bought most of them a couple of years ago when the great Obama’s Gonna Ban Them rumors were going strong. CMMG was planning on launching an AR-10 variant which would use the G3 magazines. They did come out with the lower but you had to shave down the DPMS upper. I wasn’t too keen on doing that work myself.

I think if I ever get around to having a rifle that can use these magazines, it will either be a PTR-91 or a semi-custom rifle built by SI Defense out of Kalispell, Montana. SI Defense has a lower that will fit modifed G3 magazines and they will build the whole rifle for you. I did speak with them at the NRA Annual Meeting in Charlotte and that seems the way to go for the higher quality build.

One thought on “Magazines For Guns You Don’t Own”