Who would have thought that the dead Libyan dictator Col. Moammar Gaddafi was a devotee of John Moses Browning? In the picture is his gold-plated Browning Hi-Power which was found on him when rebels captured him hiding out in a culvert.

Given that Libya once was ruled by Italy, you would have thought he would have a Beretta 92 or something similar. Conversely, given the close relationship over the years between Libya and the former Soviet Union, it would seem reasonable that he might have carried one of the Eastern Bloc pistols like a Makarov or a Tokarev.

As it is, I can’t fault his taste in pistols however gaudy this specimen might be. He might have been an evil dictator and wacked in the head about a lot of things but this is one thing in my opinion he got right. 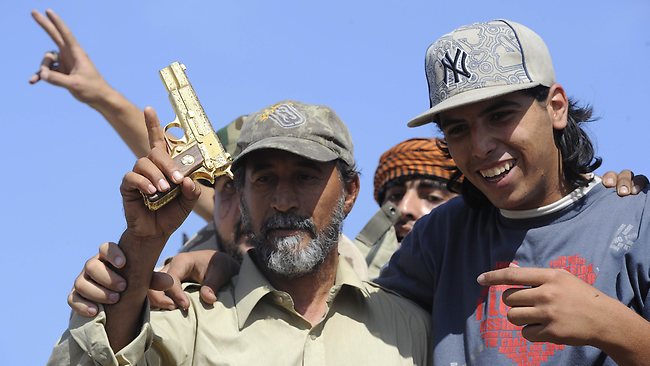 The British newspaper,  The Telegraph has a full story on Gaddafi and his golden guns. In addition to the golden Hi-Power, he had a golden AK-74 and a golden Dragunov. Like that other guy with the golden AK, Saddam Hussein, Gaddafi is dead. I guess it could be called the Curse of the Golden AK.

2 thoughts on “Who Would Have Thought It?”