Kim Rhode not only won the gold medal in Women’s Skeet today but she did it with a new Olympic record. Even more impressive, she became the first American to medal in five consecutive Olympic events.

The previous Olympic record for Women’s Skeet was a score of 93 (out of 100). Kim’s winning score was a 99. This means she only missed one clay pigeon on her way to a gold medal.

Rhode’s history-making performance began with an Olympic record score in the qualification round, as she missed only one target out of 74 shots.

She then erased any doubt about who would take the gold, nailing all 25 targets in the final to tie the world record with her gaudy total score of 99, a number that blew the Olympic record of 93 out of the water. Rhode had shared the record of 93, which she and two other women turned in at the Beijing Olympics, but Italy’s Chiara Cainero wound up winning gold in a shoot- off.

This time, Rhode didn’t leave anything to chance. Her closest competition on Sunday was China’s Wei Ning, who hit a total of 91 shots to fall way short of the standard set by Rhode. In those terms it was the most dominating performance in Olympic shooting history, with Rhode securing the largest margin percentage between first and second place.

The New York Times had this to say about her making US Olympic history.

Rhode, 33, became the first American athlete to win five medals in an individual event in five consecutive Olympic Games. She earned a gold medal in women’s skeet on Sunday, setting an Olympic record and tying the world record by hitting 99 out of 100 targets. She also became the first woman to win three gold medals in Olympic shooting.

In her first Olympics in Atlanta in 1996, Kim won a gold in Double Trap. She was all of 17 at the time. She followed this with a bronze in Sydney in 2000 and another gold in 2004 in Athens. The Olympics then did away with Double Trap for women and she switched to Skeet. She won silver in 2008 in the event in Beijing and now the gold again in London. With five medals in five Olympics, does she plan to retire? What do you think!

This success marked another high in Rhode’s amazing career, but she insisted she is far from finished and she now has her shotgun sights set firmly on Rio 2016 – and beyond.

‘I do not see myself quitting any time soon,’ Rhode said.

‘I’m looking forward to 2016 and a few more after that. The oldest Olympic medallist was a shooter and he was 72, so I still have a few more in me.’

According to a story in the San Gabriel Valley Tribune, Kim’s family had some special pins made for this Olympics with the approval of the US Olympic Committee. The pin even has a battery operated light that makes the shotgun muzzle glow red when you push on it. 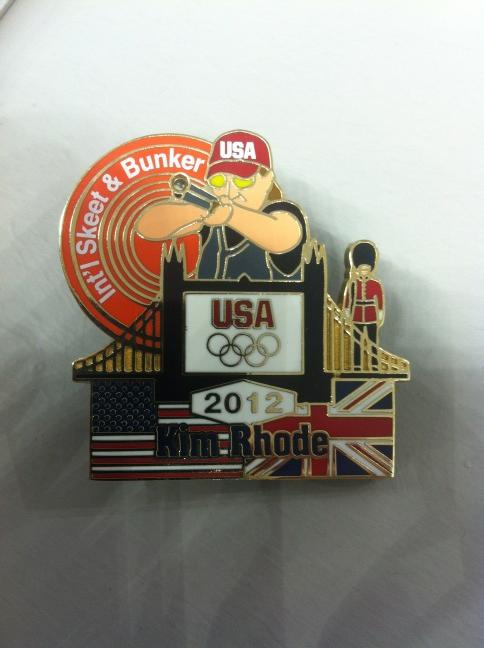 Many countries fully financially support their shooters. The US does not unless you want to count the US Army Marksmanship Unit. Given she shoots anywhere between 500 and 1,000 rounds daily, the costs add up. The Christian Science Monitor estimates she has shot over $3 million worth of shells over her career. I do think her training and competition ammo is provided free by Winchester but still…

Training since before she won gold in Atlanta as a 17 year old, Rhode estimates she shoots 500 to 1,000 rounds shot a day. The total cost of that ammunition over the course of her competitive life (again thanks to the math whizzes at the Times): $3.65 million.

Can we remember her name now? Kim Rhode. Please take out a piece of paper and write it down if you have to.

At every competition, she is “competing against people who have everything given to them,” she said at a media event in May, noting that other top shooting countries fund their shooters. And still, she has accomplished more than any of them.

“In China,” she added, “if they win, their families are taken care of for life.”

She lugs all her own gear to practice at a California range. In her spare time, she builds cars. Builds them. She has 13, including a 1917 Model-T, she said. Her favorite? A Shelby Cobra she built from a kit.

Aren’t famous Olympians supposed to be winning cars, not building them?

In conclusion, congratulations to Kim Rhode on her record-breaking performance. She had done her country and her family proud.

5 thoughts on “Congratulations To Kim Rhode”