Gene McCune of Reuters considers this man an expert on firearms.

That is Josh Sugarmann. He is the executive director of the Violence Policy Center which is an advocacy group pushing for the prohibition of firearms. Mr. Sugarmann has two other claims to fame: he coined the misleading term “assault weapon” and held a FFL for “research purposes”.

In an article by McCune published in the Chicago Tribune, Sugarmann is referred to as a firearms expert.

Semiautomatic handguns are the weapon of choice for mass murderers because they are light and easy to conceal, and adaptable to using high-capacity magazines, experts say. This allows the shooter to fire the maximum number of bullets in a short period of time, said Josh Sugarmann, executive director of the Violence Policy Center, a nonprofit group that advocates to reduce gun violence.

Josh Sugarmann, like Ladd Everitt of CSGV, is an expert – an expert in providing misleading quotes to clueless reporters.

The man below is a real firearms expert. He is the one that McCune should have interviewed but didn’t. 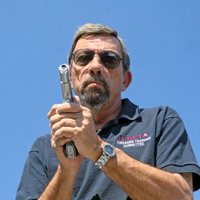 He is Massad Ayoob. Mas has written numerous books on firearms, self-defense, and law enforcement topics including the seminal In the Gravest Extreme. For over 30 years, he has been a  recognized expert witness in court cases involving shootings and firearms.

As a final aside, Dave Workman has an interesting take on Sugarmann’s comments in his Seattle Gun Rights Examiner column.