Aging pop star Madonna is a big supporter of Barack Obama. So much so that she stripped to her underwear at a concert last night in Washington, DC to show everyone her fake tramp stamp that says Obama in large letters. She also entertained them with political commentary.

The 54-year-old Material Girl roused the crowd in Washington,
D.C. Monday night with her political commentary, telling concertgoers,
“Y’all better vote for f***ing Obama, OK? For better or for worse, all
right? We have a black Muslim in the White House!

Does the former Mrs. Sean Penn know something that we don’t?  Unless I am grossly mistaken, President Obama and his supporters have always insisted that he is a Christian. Given his comments today about “the prophet of Islam” at the United Nations she may be on to something.

And lest I forget, here is Madonna. Don’t say I didn’t warn you. 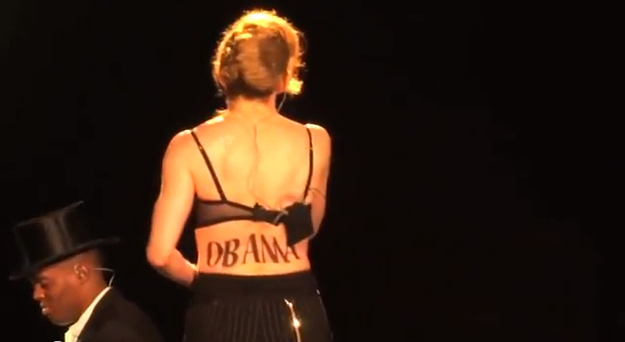 2 thoughts on “I’m Going To Need Some Eye Bleach!”