The Law Center to Prevent Gun Violence (sic) – the group formerly known as the Legal Community Against Violence or LCAV – is holding an event entitled Truth Telling: The Media’s Role in the Conversation on Guns on October 25th. It will be held at the University of California Hastings College of the Law.

The Law Center to Prevent Gun Violence & Opus2 International
are pleased to present:
Truth Telling: The Media’s Role in the Conversation on Guns

Free to Members, UC Hastings Students and Faculty
$12 All Other Students | $20 Non-Members
The Law Center reserves the right to refuse admittance.

Following an hors d’oeuvres and wine reception, a diverse group of
journalists from local and national news outlets will share their
perspective on the role the media plays in the national conversation on
guns, particularly in an election year.

As the “information age” has become
incredibly fast-moving and complex, the media’s power to inform,
educate, and persuade has also grown. Meanwhile, the topic of gun
violence in America remains complicated and fueled by passionate beliefs
from all sides.

What are some of the challenges journalists
and news agencies face when trying to tell the truth about America’s
gun laws? What impact does the national political debate have on the
media’s approach to this issue? How is “new media” affecting the way in
which this conversation is cultivated?

Please join us to find out the answers to these questions and more. Come and ask your own questions for our panelists!

Unfortunately, the former LCAV really doesn’t want to hear anything other than their version of “the truth” as told by sycophantic reporters.

Notice that little disclaimer about “the right to refuse admittance”? This means that if they know you are associated with gun rights you are to be excluded from their little soiree. They don’t want their worldview tainted by dissenting questions.


Josh Berger, a director of the CalGuns Foundation, had purchased tickets to this event. You can guess what he had waiting in the mail for him when he returned from the Gun Rights Policy Conference in Orlando. It was not the tickets he had ordered but rather a refund of his money with the note below. 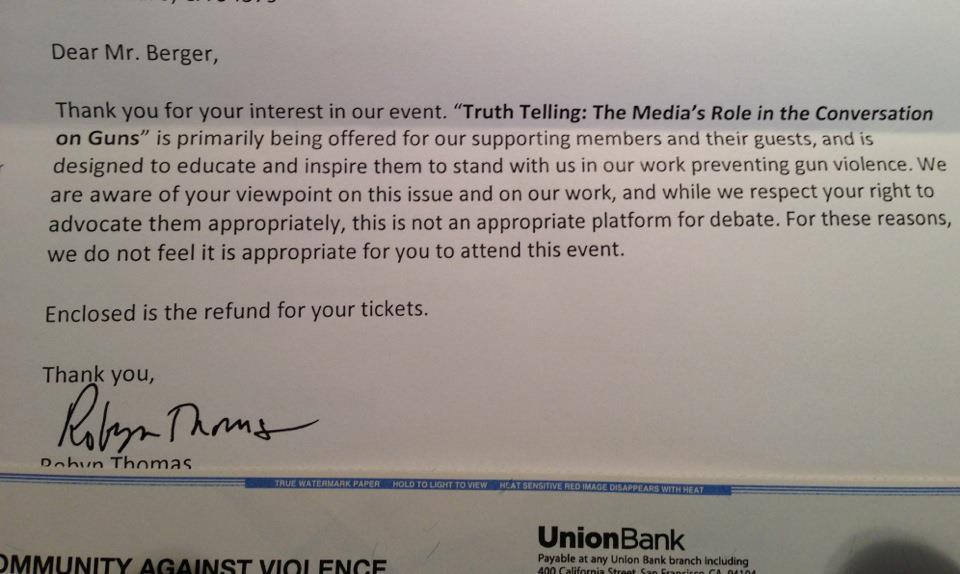 Truth telling is a joke when you are dealing with the gun prohibitionists. The only “truth” they want to hear is their own skewed version of it.

15 thoughts on “So Much For “Truth Telling””