Ruger has been running a series of “Flash Sweepstakes” as a way to generate publicity for their new gun introductions. The only problem with the whole concept is that the new product needs to be worth the expectations.

For their first Flash Sweepstakes firearm, Ruger introduced their Gunsite Scout Rifle in 5.56/.223. The overwhelming reaction of the internet was “meh”. It is somewhat heavy, it requires the use of an expensive proprietary magazine, and it was merely introducing an existing rifle in another caliber. The Scout Rifle is a fine rifle in .308 and I really like mine. However, the Mossberg MVP in all its iterations uses regular AR-15 magazines due to its patented bolt system and has an MSRP approximately $300 less than the Ruger.

The next Flash Sweepstakes introduced a number of Ruger American Rifles in left-handed versions as well as “ranch” versions. The left-handed versions of the Ruger American were welcome if a bit overdue. I am seriously considered buying one in .243 Winchester for my step-daughter who wants to go deer hunting. That said, it was again a line extension that didn’t really break new ground.

And this leads us to the third Flash Sweepstakes. It promised that it was going to be a handgun. After the first two sweeps, I really wasn’t expecting much. I am pleasantly surprised to find that it is a Ruger LCR in 9mm Parabellum.

Revolvers in 9mm have been introduced in the past by Ruger and others but many are now out of production. The Ruger SP101 in 9mm commands a hefty premium in the used market – if you can find one. Smith and Wesson introduced their 8-shot Model 929 in 9mm this year with a MSRP of $1,189. You can also find revolvers in 9mm from both Taurus and Charter Arms.

Looking at the specs of the LCR 9mm, it appears that they used the frame from their .357 Magnum as the weight is 17.20 ounces versus 13.5 ounces for their original LCR in .38+P. Reading the introduction announcement below, no mention is made of the need to use moon clips. If it really is a 9mm revolver without moon clips, wow. Charter Arms makes the Pitbull and Smith & Wesson made the Model 547. No offense intended towards Charter Arms lovers (my first revolver was a Charter Arms .38 Special) but they don’t have a great reputation for reliability. The S&W 547 was reputed to be one of the more expensive guns to manufacture that they ever made. As to the LCR 9mm, with a MSRP of $599, expect to find it at the gunstore for much less. I paid $399 for the original LCR new in the box. I’m guessing $499 or less. 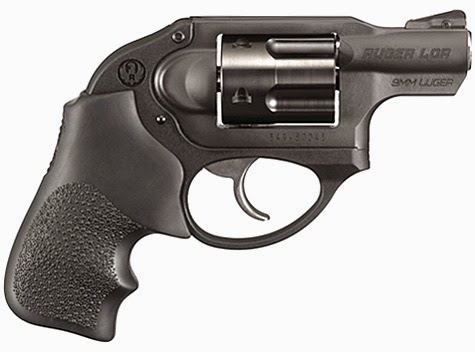 “Since its introduction in 2009, the LCR has become extremely popular with conceal carry customers seeking the simplicity of a revolver,” said Chris Killoy, Ruger President and Chief Operating Officer. “Customers have been asking for a 9mm version due to ammo availability and compatibility with pistols. We were listening and have added a 9mm version of the LCR,” he concluded.

The newest LCR retains all the features of the critically acclaimed original LCR. Its double-action-only trigger pull is uniquely engineered with a patented Ruger® friction reducing cam fire control system. The trigger pull force on the LCR builds gradually and peaks later in the trigger stroke, resulting in a trigger pull that feels much lighter than it actually is. This results in more controllable double-action shooting, even among those who find traditional double-action-only triggers difficult to operate. The LCR is elegantly designed with three main components: a polymer fire control housing, monolithic frame, and an extensively fluted stainless steel cylinder. When originally introduced, the Ruger LCR revolver was one of the most significant new revolver designs in over a century and it has since been awarded three patents.

In addition to 9mm Luger, the LCR double-action-only model also is available in .38 Spl. +P, .357 Mag., .22 WMR. and .22 LR. The exposed hammer LCRx™, which can be fired in double- or single-action modes, is available in .38 Spl. +P. All LCR models feature replaceable ramp front sights with white bar, and a fixed U-notch rear sight. Some models are available with Crimson Trace® Lasergrips® instead of the Hogue® Tamer™ Monogrip®, which comes standard.

I’ll be interested to hear the reaction of Grant Cunningham to this new revolver on the next episode of The Gun Nation podcast.

UPDATE: Thanks to the lead in the comments from Overload in Colorado, I did find out that the Ruger LCR 9mm does use moon clips. They are selling them in the ShopRuger store in 3 packs. I wish Ruger engineers could have devised a non-moon clip solution without greatly increasing the cost of manufacture. Obviously they couldn’t. Still, I am happy to see the LCR in 9mm. It’s not a game changer but it is a welcome addition to the line and excites me more than the other two new introductions.

UPDATE II: Ruger released a video of the LCR 9mm including use of its moon clips.