The gun prohibitionists are always in a tizzy about “the Internet sale of guns”. Everytown Moms for Illegal Mayors is making a big deal about “Internet sales” in the campaign for the Washington State universal background check initiative I-594. That initiative, if passed, would mandate universal background checks for all sales and transfers of firearms. Of course, they are being helped by their allies in the Seattle media with articles like this giving the impression that Facebook is just one big gun exchange.

Here is what the Brady Campaign sent out to their true believers in their Toolkit 2014 which provides suggestions for contacting legislators and letters to the editor along with their general campaign strategy.

Unfortunately, when the bill (Brady Law) was created legislators could not have dreamed of the booming internet
market and rising gun shows as a means for gun sales. Current law does not require a background
check through these venues, meaning that a dangerous person could order a firearm online, meet
someone in a parking lot to pick it up, and commit a crime that same day. In fact, there are several
instances of this exact tragedy happening.

Gabby Giffords and the Space Cowboy are not to be outdone. Their “in-depth” report purportedly shows how the Internet is being used to circumvent laws banning firearm possession by the mentally ill. They are also pushing background checks as an issue in the race for Giffords’ former Congressional set in their ads against Col. Martha McSally.

The Violence Policy Center has been on this bandwagon since the late 1990s as have anti-gun politicians such as Sen. Chuck Schumer (D-NY).

You and I realize that companies like CDNN, Bud’s Gun Shop, Cheaper Than Dirt, and Kentucky Gun Company among others are not shipping firearms willy-nilly across the country like they are living in some pre-GCA 68 world where anyone could mail order a gun and get it delivered to their home. Moreover, as traditional classified advertising is dying in newspapers due to the cost and declining readership, it is being replaced with online venues ranging from the general to the specific. Many gun forums maintain their own classifieds.

It is within this context that I was surprised by a new question on the ATF Form 8 ((5320.11) Part II. This form is for the renewal of a Federal Firearms License I have circled it in the photo below. Having had my Curios & Relics FFL for going on 18 years, this will make my sixth renewal of my collector’s license. My last renewal was in 2011 and it did not have this question on it. 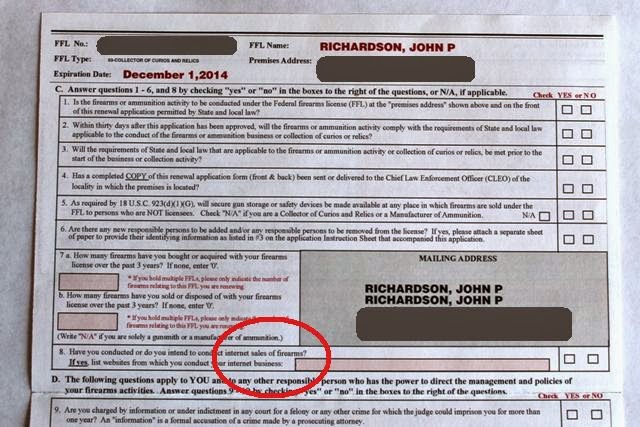 It asks, “Have you conducted or do you intend to conduct internet sales of firearms? If yes, list the websites from which you conduct your internet business.” If you go to this link, you can see that the prior version of ATF Form 8 did not have this question on it.

As best as I can determine, this is a recent change. The Federal Register contains a notice from ATF dated January 30, 2014 stating that they were submitting a request for review and approval of Form 8 (5310.11) and that the public had 60 days to comment. No draft of the form was shown. A subsequent notice extended this comment period to May 2, 2014.

The final revision was approved on June 26, 2014 according to this OMB database. (If you click on the form name in the link above, it will pull up a PDF of this form.) Reading the justification letter for this revision of Form 8, much ado was made about why they changed this or that question to make it more readable or easily understood. That said, there was absolutely no mention of Q. 8 and the inquiry about Internet sales of firearms. None.

So the question remains: why this question and why now? Is this a prelude to some future restrictions on the advertising for sale of firearms on the Internet? Why is this question not asked on initial applications for either a FFL or a Collector’s License? I don’t know because the ATF slipped it by OMB without any justification of it and they haven’t said anything publicly about Internet sales that I am aware.

As with all things ATF, this bears keeping a watchful eye on them and this issue.

13 thoughts on “Now Why Would The ATF Be Asking About Internet Sales?”