Moms Demand Action has never been above claiming a victory where there is none. I came across the picture below yesterday. It seemingly shows Academy Sports and Outdoor stores changing their policy because of a push from the Demanding Mommies. As I mentioned last week, they are on a campaign to get Cabela’s to kow-tow to their demands regarding the erroneously named “incomplete checks.” 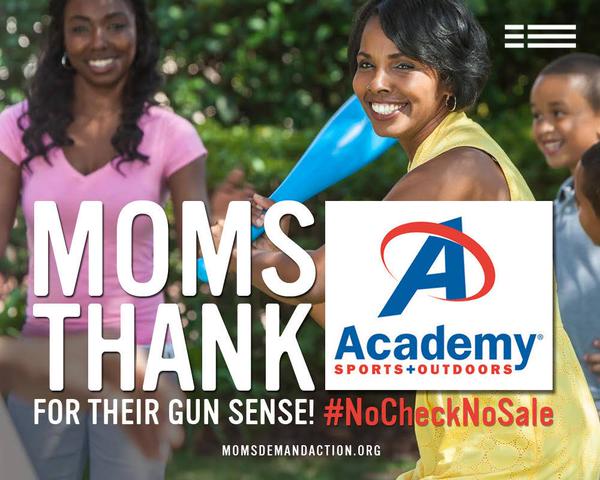 They also posted a similar photo regarding Dick’s. Now I don’t care really what Dick’s does because I think they live up to their name post-Newtown.

I checked the Academy Sports website to see if they had any press release regarding this. I came up empty. Likewise, I came up empty on the Everytown Facebook page. Now it gets me to wondering if they just contrived this out of thin air. So I went to that fount of all knowledge, AR15.com, and posted a message on the General Forum asking about it. Out of the 88 replies, I got this one that seems to indicate Academy policy has always been to only release a firearm when they got a definitive OK. Bear in mind that this is from a part-time employee and not a store manager.

I work at Academy part time. Its 21 for handguns and pistol grip shotguns. 18 for long guns, period. I can’s even show a handgun or pistol grip shotgun to anyone under 21. But if you’re 18, you can buy any long gun. Academy won’t sell a gun without a “Proceed” or a CCW (at least in MS). IDK about historical data as I have only been there about 2 months.

Other comments seem to indicate that this policy probably came down from their risk management department a long time ago.

So is Academy Sports and Outdoors kow-towing to the Demanding Mommies? Probably not. They had, and have, a policy in place regarding NICS checks that was more stringent than called for by law. It’s not a victory because nothing was changed when Shannon and her minions came calling. It is a policy they like but it wasn’t a win.