Most of those who were involved in the attack on Pearl Harbor in 1941, whether as attackers or defenders, are not alive today to tell their story. It is up to us in the succeeding generations to remember it and to tell it.

First, let us remember those men and women on the American side who died during the attack. The casualty list is here. As to the Japanese, I’m not sure where to find any of those records.

The US Navy has an official account of the attack. It was compiled by CINCPAC for the Secretary of the Navy and was dated 15 February 1942. The report gives the disposition of the US Pacific Fleet on December 7th, an after action report, damage reports, and the current state of readiness after the attack. It is quite comprehensive.

Remembering that there was no social media at the time, the role of propaganda posters was critical for energizing the populace of the United States on to a wartime footing. Some of these posters were simple and some were not. The last poster below shows the Japanese wearing glasses. That plus buck teeth seem to be the common characterization of the Japanese in these propaganda posters. There are many other posters I could have used but I thought them too overtly racist. Unlike the war in Europe, World War II in the Pacific Theater was brutal, nasty, racist, and without mercy. A good book on war in the Pacific is John Dower’s War Without Mercy. 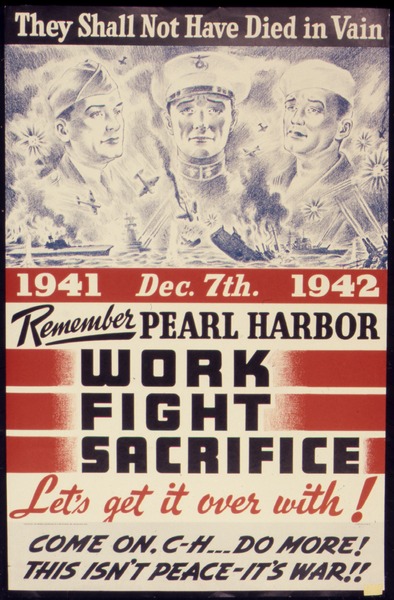 Finally, of the movie accounts of the attack, I still think Tora Tora Tora is the best. Sometimes it is included with Amazon Prime and sometimes not.