Ballots for the NRA Board of Directors have been mailed out in the February issues of American Rifleman, American Hunter, First Freedom, and Shooting Illustrated. These have only gone out to Life Members and annual members with five or more years of continuous membership as they are the only people eligible to vote in the Board election.

I have received my ballot and you can see how I’m voting in the picture below. If you look closely, you will see I’m only voting for three people. I’m a strong believer in bullet or targeted voting. Voting for up to 25 people dilutes the power of your vote and makes your top choices equal with your bottom choices. 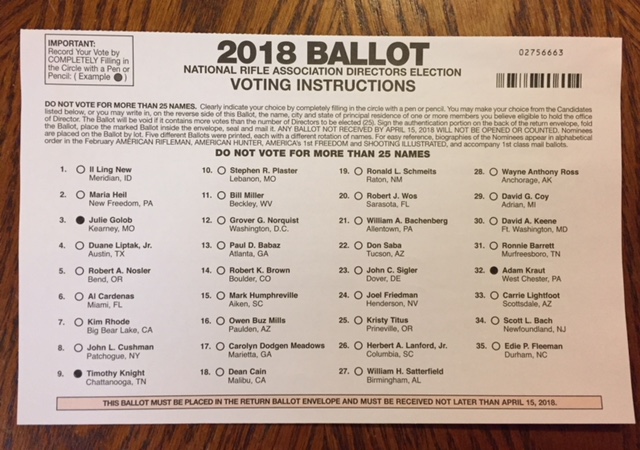 This has been an unusually contentious election thanks to those in the old guard like Marion Hammer. I want to explain why I voted for these three deserving individuals and only these three. This is not to say that some of the others on this ballot would make good choices but rather that these three need to be on the board.

First, and I’ll be perfectly blunt about this, none of these three were endorsed by Marion Hammer. The fact that they weren’t endorsed is an endorsement in and of itself. I was greatly surprised that someone with the accomplishments of a Julie Golob was passed over for inclusion Ms. Hammer’s endorsements. This is especially true when you have a political hack like Grover Norquist endorsed who has only a marginal connection to the Second Amendment community.

Second, both Adam Kraut and Tim Knight have grassroots support as evidenced by the fact that they were both nominated by petition. Tim sought the petition nomination even though he was nominated by the Nominating Committee. Tim’s grassroots efforts in Colorado led to the recall of anti-gun Senate President John Morse and Sen. Angela Giron. He, along with fellow board member Sean Maloney, were on the ground helping to organize the recall and both would later be elected to the board. As to Adam, I was one of the people helping to gather signatures for him as I gotten to know him at the 2017 NRA Annual Meeting and afterwards. While Julie was nominated by the Nominating Committee, I think she has significant grassroots support given her past outreach efforts especially to women shooters.

Third, they are all relatively young when compared to the rest of the board. Adam is in his 30s, Julie is 40, and Tim is in his late 40s. If the NRA is going to appeal to Gun Culture v2.0, they are going to have to appeal to a younger demographic and you don’t do that by having a board composed of people my age (60+).

Fourth, both Adam and Julie are masters of the use of social media. Both use Instagram to get their message out and both have podcasts or YouTube channels related to firearm topics. Julie has JulieG Radio while Adams contributes the Legal Brief to The Gun Collective.

Fifth, I think these three will help return the NRA to the reforms engendered by the Cincinnati Revolt of 1977. None are part of the old guard that helped neuter that changes in the NRA wrought by the Cincinnati Revolt as organized by Harlon Carter and Neal Knox. Adam, especially, has publicly promoted bylaw changes that would introduce modified term limits, encourage attendance at board meetings, and provide a means for celebrities to help the gun rights movement without having to serve on the board.

Finally, all three are accomplished in their own right. Rather than rehash their accomplishments, you can read about Tim, Julie, and Adam on their own web pages.

5 thoughts on “My Endorsements For The NRA Board Of Directors”