A group calling itself the National Constitutional Coalition of Patriotic Americans is calling for gun rights rallies at state capitals across the nation. It is called National Support the Second Amendment Rally at the Capital. 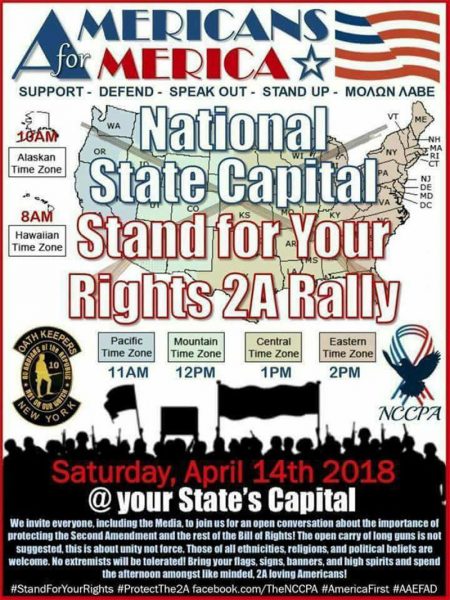 This effort is not affiliated with gun rights groups like Grass Roots North Carolina, Georgia Carry, the NRA, or Gun Owners of America. They are not opposing it but they are not sponsoring it either.

In many states, people are being encouraged to open carry unloaded long guns. I can’t speak for other states but do not do it in North Carolina.

Open carry in North Carolina is a constitutional right that was affirmed by the NC Supreme Court in State v. Keener back in 1922. Notwithstanding that, there are places where carry of any firearm, loaded or unloaded, is forbidden. The grounds of the North Carolina State Capitol is one of those places. Interestingly, papers like the Charlotte Observer are running stories headlined “Gun rights supporters: Bring your unloaded rifle to rallies”. They conveniently forget to tell you that it is illegal in North Carolina.

DO NOT CARRY A FIREARM if you are attending the rally in Raleigh, North Carolina as it is ILLEGAL. You are asking to be arrested. Moreover, you will be giving aid and comfort to the enemies of the Second Amendment. Let me repeat that – if you carry a loaded or unloaded firearm on the State Capitol grounds in North Carolina you will be providing a photo op and talking point for every gun prohibitionist, anti-gun group and their media allies in the state and country.


Advocate for our rights but don’t be an idiot.