A shareholder proposal put forth by Catholic Health Initiatives and the Northwest Coalition for Responsible Investment for a vote by Ruger shareholders passed. The proposal which was opposed by the board of directors requires the company to prepare a report on “on how it tracks violence associated with its firearms, what kind of research it is conducting related to so-called smart gun technology and its assessment of the risks that gun-related crimes pose to the company’s reputation and finances.”

The measure was spearheaded by Colleen Scanlon who is the chief advocacy officer for Catholic Health Initiatives which is an organization of over 100 Catholic run hospitals.

The proposal was spearheaded by Colleen Scanlon, senior vice president and chief advocacy officer for Catholic Health Initiatives, a system of hospitals and academic institutions. Her organization was one of four shareholders who spoke at the meeting, and all of them asked the Ruger executives what they were going to do about gun violence and gun safety.

“We as shareholders are saying that gun violence is significant enough that you, as a gun company, need to address what your responsibility to gun safety is,” said Scanlon to CNNMoney.

She said that hospitals within the Catholic health system have treated many patients with gunshot wounds, and she wants Ruger to focus on smart gun technology. She said that her institution was one of 11 religious shareholder organizations to draft the proposal

“Wouldn’t it be wonderful to see them leading an effort about making a smarter gun, like fingerprint activated guns and tracking systems for finding lost or stolen guns, like with iPhones?” she said. “We know that gun owners are responsible and sensible people, but we know that guns can end up in the wrong hands.”

You can read the shareholder proposal here along with the rationale given for its passage. I would note that any supporting documentation that relies on the Violence Policy Center is suspect. The firm Institutional Investor Services which advises on shareholder proposal urged passage which I assume is the reason some of the major institutional investors vote for it.

Ruger sent out an email this evening with their response to the passage of the shareholder proposal. 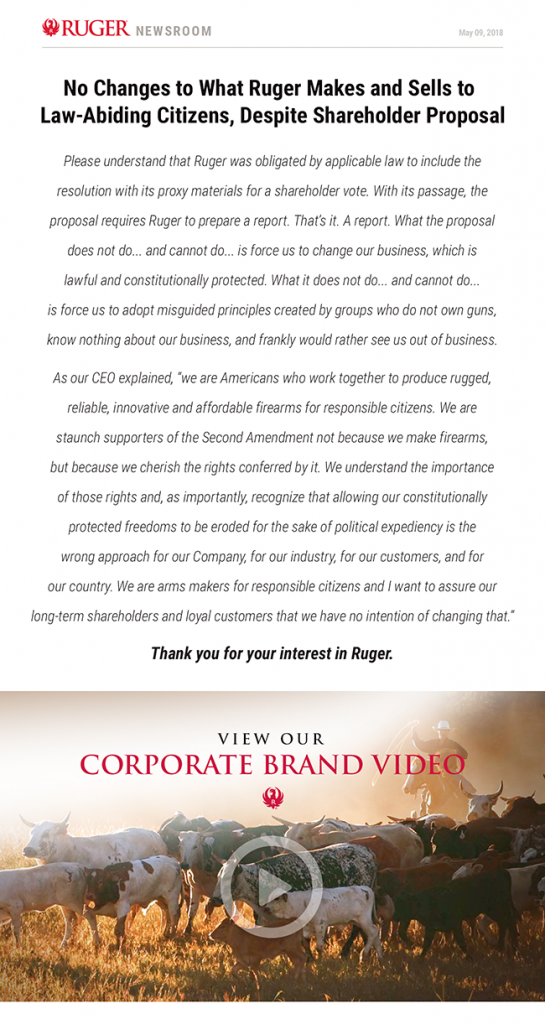 The same coalition that pushed this anti-gun nonsense on Ruger will be attempting to do the same thing to American Outdoor Brands Company aka Smith & Wesson. This is the danger that we should come to expect in the future for firearms companies and those that do business with them. I foresee a time in the not too distant future when you will see most of these public companies going private to avoid having to deal with this.

I think it is important that you know just which religious orders are behind these proposals. I’m Catholic but I’ll be damned if I agree with any of these nuns. I certainly wouldn’t be making any contributions to their orders.

UPDATE: The full transcript of the Ruger annual meeting can be found here. You will note some of the nonsensical questions posed to Ruger CEO Chris Killoy by “religious leaders”.

UPDATE II: For an excellent summary of the shareholder proposal accomplished, please read this editorial by Jim Shepherd of the Outdoor Wire. He compared it to a fly buzzing around a cow. It is pestering rather than the steering claimed by proponents.

3 thoughts on “No Changes To What Ruger Makes And Sells”