You may have seen the story last week that announced with great fanfare that Toms Shoes was going to donate up to $5 million to “combat gun violence” (sic). Since they are trendy shoes popular with Millennials, the announcement was made by company founder Blake Mycoskie on The Tonight Show with Jimmy Fallon. The money will go to organizations like Giffords, Everytown, Moms Demand, and March for our Lives among others.

For those that don’t know about Toms Shoes, their value proposition is that when you buy their trendy (and flimsy) shoes, they will donate another pair to a shoeless child in a Third World country. In other words, spend $50 on their shoes, feel good about yourself, and in return they will ship another pair which cost them probably a buck or two to Haiti or the Congo or a like country. What a great marketing ploy that even uber-liberal Vox calls a sham. Moreover, the shoes manufactured in China, Argentina, Haiti, and Africa could be coming from sweatshops.

The End Gun Violence Together campaign even features its own trendy-looking logo that will now be used throughout Toms Shoe stores nationwide.

Adams Arms, the Florida based maker of piston ARs and piston conversion kits, saw this and is using it as the genesis for their own campaign to help homeless veterans and promote gun rights. They are calling it Adams Arms’ #MagsForToms BuyBack Movement. They are trading 30-round Amend2 magazines for new or used Toms Shoes. In states where 30-rounders are forbidden, they will trade a 10-round magazine. Their original idea was to take all the shoes traded in and burn them in an Instagram live video.

“Originally we were going to burn the shoes, but decided that’s no way to treat something that could be used again by homeless veterans,” VP of Sales & Marketing, Jens Krogh, said.

“But then we thought to ourselves… we should at least make the shoes less hippie. So we’re going to alter them with a pro Second Amendment message and THEN donate them to several worthy causes for veterans and impoverished people living in oppressive countries where they do not have the freedoms we cherish.”

Amend2 Magazines liked the Adams Arms plan so much that they donated the first batch of #MagsForToms to be traded for Toms Shoes.  Details on how to make the trade are below.

Here’s how it works. Send Adams Arms your shoes at:

You must include a note with your shipping address and email address. It must be legal to ship a 30 round mag to your state, or if you live in a restricted state, Adams Arms will send you a 10 round magazine.

Before you send them… post a picture with #shoeburn #magsfortoms and #shallnotbeinfringed to spread the word.

As Adams Arms correctly notes in their release, the Toms campaign which includes a push for universal background checks “to end gun violence” (sic) will do nothing to keep firearms out of the hands of criminals. I would go further and say it does nothing to address the root causes of the criminal misuse of firearms in places like Chicago or Baltimore. 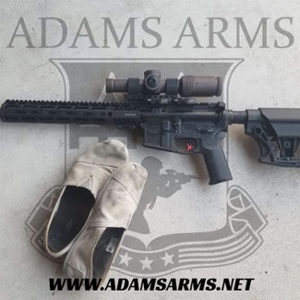 My granddaughter Olivia has Toms given to her that I’m sure she has outgrown. I may just to trade them in on a new magazine. In the meantime, I applaud Adams Arms for doing something positive for both the Second Amendment and homeless veterans.