The Brady Campaign’s North Carolina front group, North Carolinians Against Gun Violence, is opposed to HR 822 – the National Right-To-Carry Reciprocity Act of 2011. They just sent out the Tweet seen below: 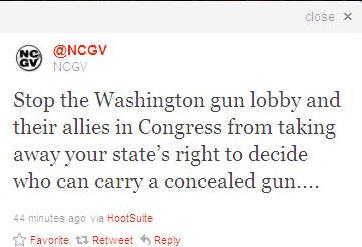 They don’t want the rest of the country to enjoy the same rights as North Carolinians come December 1st. For on that day, thanks to the passage of HB 650, North Carolina will recognize all out-of-state concealed handgun permits.

I guess NCGV has their blinders on as they don’t see the hypocrisy in making such a statement.