You can tell that the SHOT Show is fast approaching as major gun manufacturers are starting to announce new guns. On Monday, Ruger announced the SP22 pistol and the Ruger American Rifle. The first is a polymer-framed DA/SA .22LR semi-auto pistol while the later is a lower-cost American-made bolt action rifle aimed, in my opinion, squarely at the Savage Axis and the Mossberg 100ATR and 4X4. 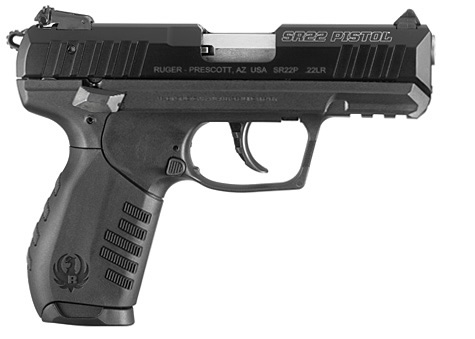 From Ruger’s press release on the SR22:

Sturm, Ruger & Company, Inc. (NYSE: RGR) is proud to announce the new Ruger® SR22™ pistol, the do-it-all .22 pistol for the shooter who appreciates style and demands reliability. The SR22 is a rugged, scaled-down version of a full-sized pistol, perfect for plinking, target shooting and small game hunting. The lightweight SR22 has modern styling and is fun to shoot while using inexpensive rimfire ammunition.

“Ruger has built a solid reputation for excellence in rimfire pistols with the Mark III™ and 22/45™ product families, and the new SR22 will contribute positively to that reputation,” said Chris Killoy, Ruger Vice President of Sales and Marketing. “This pistol is feature-packed and an incredible value – consumers won’t find a similar product with everything the SR22 offers at a comparable price. It functions with all types of .22 LR ammunition for extreme reliability; once rimfire enthusiasts pick it up, they won’t want to put it down,” he concluded.

The SR22 has light double-action and crisp single-action trigger pulls. Its external hammer is designed with a rounded spur for easy cocking and single-action shooting. The SR22 features a polymer frame and two interchangeable (no tools required) rubberized grips with angled serrations, allowing shooters to select either a slim or wider palm swell option. The aerospace-grade aluminum slide has serrations on both front and rear for better grip and slide manipulation. The easy-to-use underside Picatinny rail features multiple cross slots for variable mounting of most popular accessories.

The 3-dot sight system has a fixed front sight and a rear sight that is adjustable for both windage and elevation. A reversible blade allows shooters to select two white dots or a solid black blade. Other SR22 features include a stainless steel replaceable barrel, an ambidextrous manual thumb safety/decocking lever, ambidextrous magazine release, plus a visual inspection port to determine the load status of the pistol. The SR22 includes two finger grip extension floorplates that can be added to the magazine for comfort and grip. Each SR22 is also shipped with two 10-round magazines and a soft case.

Jeff Quinn at Gunblast.com has produced a review video on the SR22. He says this pistol is a “keeper” and that it took 19 different varieties of .22LR with virtually no problems. He report only one failure to eject with a Winchester Dynapoint.

From the Ruger press release on the American Rifle:

Sturm, Ruger & Company, Inc. (NYSE: RGR) is proud to present the Ruger American Rifle™, an all new, 100% American made bolt-action rifle that sets a new standard of excellence among value-priced, bolt-action rifles. Offered in short- and long-action calibers, the Ruger American Rifle combines the rugged reliability of Ruger’s past with the award-winning ingenuity featured in so many of Ruger’s new products.

The 6-1/4 pound Ruger American Rifle offers no-compromise engineering innovation, proving that a world class rifle need not come with a high price tag. The new Ruger Marksman Adjustable™ trigger offers a crisp release with a pull weight that is user-adjustable between three and five pounds. Ruger’s new patent-pending Power Bedding™ system utilizes stainless-steel bedding blocks insert-molded into the stock to positively locate the receiver and free-float the barrel. The barrel’s rifling is cold hammer forged to exacting tolerances, providing sub-MOA accuracy, long-term endurance, and a mirror-smooth finish that is easy to clean.

The Ruger American Rifle’s three-lug, 70 degree bolt provides ample scope clearance, and utilizes a full diameter bolt body and dual cocking cams for smooth, easy cycling from the shoulder. The reliable 4-round, rotary magazine fits flush with the stock and offers the smooth feed that has become the hallmark of Ruger rotary magazines. The receiver is drilled and tapped for mounting the included scope bases.

The Ruger American Rifle carries easily, shoulders quickly, and shoots comfortably, thanks to the ergonomic design of its trim, lightweight stock with an ambidextrous palm swell, forend finger relief, and soft rubber recoil pad. The easily accessible tang safety, which can be placed “on safe” while the bolt is cycled, is complemented by the passive, trigger-mounted safety which positively locks the trigger for an additional measure of security.

Jeff Quinn has also produced a video on the American Rifle. Using off the shelf non-premium loadings, his worst 3-shot group was 1 inch at 100 yards. That is excellent in any rifle and extraordinary for a rifle in this price category.

I anticipate seeing a lot of these rifles sold at the Walmarts of the world. At this price point and the Ruger name, it should sell well and could inject some new life into the bolt-action rifle market.

One thought on “Ruger Announces Two On The Second”