The gun prohibitionists are already saying that blood will run in the streets when the Illinois General Assembly crafts some form of concealed carry legislation in accordance with today’s ruling by Judge Richard Posner of the 7th Circuit Court of Appeals.

“As the dissenting opinion points out, the two judges who threw out
Illinois’ law did not take account of the danger to the public from
stray bullets, and they ignored the Illinois legislature’s determination
that carrying weapons has been shown to escalate violence,” said Lee
Goodman, an organizer with the Stop Concealed Carry Coalition.

If Lee had taken the time to examine the graphic below, he would see that there is no positive correlation between less-restrictive (legal) carry (shall issue and constitutional issue) and increased violent crime. Let’s face it – Chicago already has concealed carry by thugs and criminals. The only ones prohibited from protecting themselves are honest, law-abiding citizens.

In October, I posted a graphic developed by Rob Vance that showed the progress in the growth of firearms carry rights from 1986 through 2011 as a percentage of the U.S. population. In 1986, 90% of the U.S. population lived in states that severely restricted carry rights or had none at all. Today, over two-thirds of Americans live in states with either shall-issue carry or constitutional carry. The conclusion was that shall-issue is the new norm.

Recently, the FBI released its Uniform Crime Reports statistics. Rob generated a new graph plotting these violent crime rates against the growth of less-restrictive firearm carry rights over the period of 1986 through 2011. 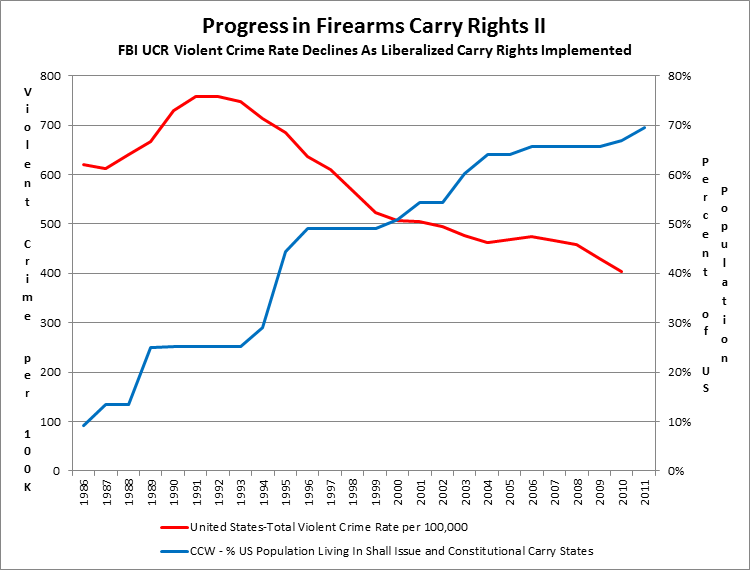 The data used to generate this graph is available here in Google documents. As I said in the original post, unlike the gun prohibitionists, we publish our data for the world to see. The data used comes from three sources: the FBI Uniform Crime Reports, the U.S. Census, and www.gun-nuttery.com/rtc.php which tracked the changes in carry laws over time.

Rob had the following conclusions after examining the data:

Violent crime is a complex issue, but national data is clear that there is no positive correlation between liberalized concealed carry laws and increased violent crime.

The “blood in the streets” or “Wild West” scenarios just don’t play out. To be fair, state level data is highly variable, so some caution needs to be exercised in drawing conclusions.

While violent crime did not go down as sharply as the progress in carry rights rose, one thing that needs to be kept in mind is that while shall-issue may be the new norm that right is not extended to all locations. Bars, restaurants, government buildings, post offices, and many parks are still off-limits to concealed carry. I think this will become the next battleground for concealed carry. Interestingly enough, restrictive states like California actually have fewer restrictions on where one may carry.

As an example of the battle for fewer restricted locations, one need look no further than here in North Carolina. This session of the General Assembly changed the law concerning concealed carry in state, municipal, and county parks. It is now allowed everywhere with the exception of a local opt-out for “recreational facilities”. As might be expected, some locales are trying to push the limit on what is considered a recreation facility far beyond what was intended by the General Assembly.

Shall-issue may be the new norm but the fight will continue.

NOTE: If you click on the graphic, you can view it in its full original size.

23 thoughts on “Every Picture Tells A Story, Part Two (Repost)”