Mayor Bloomberg can add another of his fine group of mayors to the Illegal Mayors file. Mayor Craig Lowe of Gainesville, Florida was arrested by the Florida Highway Patrol on charges of DUI with property damage. According to reports, Mayor Lowe was found asleep behind the wheel of his wrecked Honda Civic this past Thursday. He failed the field sobriety tests administered by the FHP.

According to the story in the Washington Free Beacon, Mayor Lowe, a Democrat, is in a run-off election on April 16th. He is due to appear in court on April 11th.

Mayor Lowe was one of 30 mayors featured in a recent MAIG video “demanding a plan”. He appears at about the 19 second mark and is given the honor of saying “Newtown” in their list of mass shootings. He looks considerably better and more polished in his dark suit and lavender tie than he does wearing a green-striped jumpsuit as in the picture above.

Illegal Mayors have a way of disappearing as if they were disgraced members of the Soviet Politburo. Instead of not being seen at the May Day parades, they disappear from the MAIG website. A screen capture of their webpage taken this morning still shows Mr. Lowe as a member in good standing of MAIG. I wonder how long that will last. 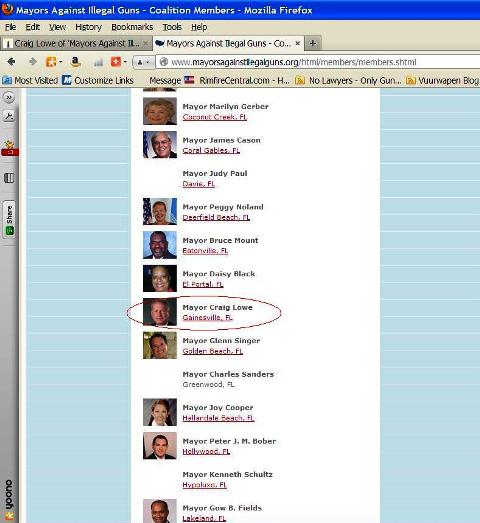 4 thoughts on “Another One For The Road, Mayor Lowe?”