As many people already know, JayG of the blog MA-rooned has been appointed the Associate Editor of the NRA’s publication Shooting Illustrated. It was reported first on The Squirrel Report and then on his blog.

The NRA has now issued a press release announcing that Jay will be the new Associate Editor. As SayUncle notes, “JayG has gone from blogger to one of those guys that sends out emails of his press releases to bloggers.”And I might note, it couldn’t have happened to a nicer guy.

What caught my eye was the picture of Jay accompanying the article. Jay is shown holding what appears to be a Mossberg 590A1 with a bayonet. 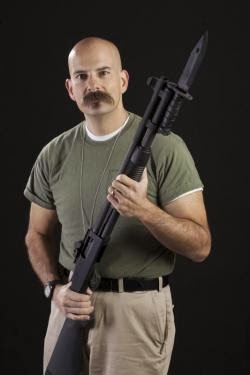 The only thing that could have made the picture better would have been if Jay had been holding the shotgun over his head a’la Red Dawn and shouting “Freedom!”. It would have been an appropriate way to celebrate his departure from the Volksrepublik. However, it might have scared the suits in NRA Headquarters a bit too much.

4 thoughts on “A Manly Picture!”