I will admit that I was more than a little surprised when I read the following press release announcing that IWI US (Israel Weapons Industries’ US subsidiary) had shipped their 20,000th Tavor SAR bullpup carbine. The market for a bullpup like the Tavor SAR or the Steyr Aug would seem a bit limited given the design and the price but obviously I’m wrong in my estimation. And reading their press release below, it seems I’m not the only one wrong in my estimation. Sales were three times greater than IWI US projected themselves. 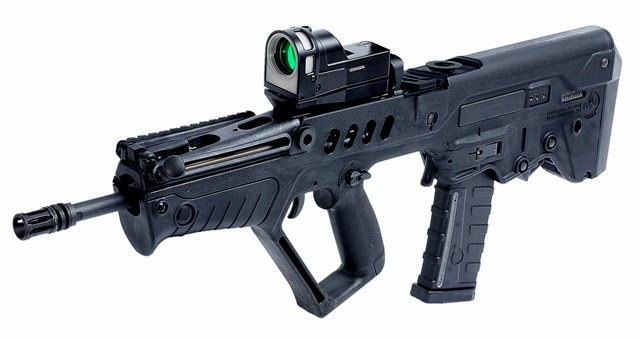 The press release announcing this milestone:

Harrisburg, PA (March 2014) – IWI US, Inc. a subsidiary of Israel Weapon Industries (IWI) Ltd., proudly
announces the 20,000th TAVOR® SAR has been shipped. The IWI US facility was officially opened in December
of 2012 and began shipments to distributors of the highly anticipated; Israeli designed and built rifle in late
March of 2013.

2013 became the year of the TAVOR® SAR, with unexpected demand that tripled projected sales and garnered
the receipt of two coveted awards: American Rifleman’s Golden Bullseye Award for Rifle of the Year and the
popular blog, TheTruthAboutGuns.com, Rifle of the Year. IWI US doubled their employee base to meet the
demand for the TAVOR® SAR, as well as hired additional management as the product found a receptive
audience in the law enforcement community.

IWI US expects to expand its facility in 2014 to accommodate continued growth. Additionally, IWI US will
launch an online store with a variety of IWI US approved accessories for the TAVOR® SAR in the coming weeks.

“This is a watershed moment for IWI US and our employees,” Michael Kassnar, Vice President of Sales and
Marketing for IWI US commented. “We could not have met our goals without the enthusiasm, dedication and
the Pennsylvania work ethic of the IWI US
team.”

5 thoughts on “Surprising Numbers From IWI About Tavor Sales”