The gun prohibitionists like to compare firearms manufacturers to tobacco companies in that both supposedly have to market to youth because their customer base is old and white and dying out.

For example, this article from Think Progess asserts that Americans have a declining interest in the shooting sports and the gun companies have to hook kids on AR-15s.

Responding to Americans’ declining interest in shooting sports, gun manufacturers are developing programs to market their products to younger children. The National Shooting Sports Foundation trade association and the industry-funded National Rifle Association spend millions of dollars annually to recruit kids as gun enthusiasts. And those efforts increasingly focus on pushing semi-automatic assault weapons, including the very model used by the shooter in the Newtown, Connecticut tragedy.

The mainstream media loves this meme and repeats it incessantly as evidenced by stories in the paper of making things up (NY Times), CNN, the Guardian, and others. It ignores the fact that one has to be 18 to purchase a long gun from a FFL and 21 to purchase a handgun. Moreover, many states forbid the possession of a firearm by youth under certain ages unless accompanied by a parent or guardian.

Of course this is utter bovine excrement. If anything, introducing kids to firearms through proper training programs like 4H, the NRA Junior programs, and the Scholastic Shooting Sports Foundation programs help build more responsible and more mature youth.

Thus, when I got the following press release from Glock yesterday announcing their contribution of $25,000 to the Scholastic Shooting Sports Foundation, I smiled. I knew it would help kids and piss off the gun prohibitionists which is a true win-win.

Ed Fitzgerald, Special Projects Manager at GLOCK, Inc. has worked closely with the SSSF over the years. “As an industry leader, GLOCK understands the importance of promoting safe and effective ways of introducing competitive shooting to young men and women who are just starting in the sport,” Fitzgerald said, “The next generation of shooters are fostered through organizations like the SPP. We will continue our efforts to lead the way by supporting the Scholastic Shooting Sports Foundation.”

Accepting the check at the GLOCK Booth (#633) were Ben S. Berka, President and Executive Director of the SSSF and Scott Moore, National Director of the Scholastic Pistol Program (SPP). Presenting the check on behalf of GLOCK were Josh Dorsey, Vice President at GLOCK, Inc., and GLOCK spokesperson, R. Lee Ermey, “The Gunny.” The ceremony was attended by an exclusive group of Industry media.

GLOCK has been an active sponsor of the SPP since its creation in 2012. “The Scholastic Shooting Sports Foundation is honored to receive this major gift from GLOCK. GLOCK’s support of the SPP is a key element to building a foundation from which to grow all action pistol sports,” Ben S. Berka said. “This donation will help local Scholastic Pistol Programs at the grass-roots level and provide local teams with the education, support and resources to run successful programs.” 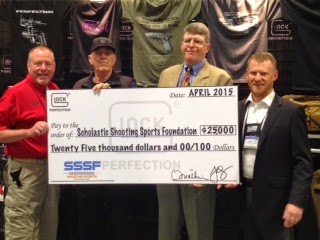 I do wonder what The Gunny might say to those who would criticize Glock’s donation to SSSF as merely buying future customers. It probably wouldn’t be printable in a family publication.