Voting members of the National Rifle Association – Life or higher members and five-year continuous annual members – should have received their Board of Directors ballot in the February 2019 issue of the NRA magazine that they have chosen. Mine came in my American Rifleman. The ballot this year contains 35 candidates. 33 of these candidates were chosen by the Nominating Committee and two are on the ballot as petition candidates. The Nominating Committee per their usual named a mix of politicians, celebrities, the usual hanger’s on, and, believe it or not, actual gun people.

Out of these 35 candidates, you are allowed to vote for up to 27. However, to be very blunt about it, if you vote for 27 people you are an idiot just checking boxes and you really don’t give a damn about who is on the board or the direction it takes. I say this because you are giving equal weight to both the best candidates and to the worst candidates out of the 27. If you bullet vote or pick a small number of candidates, then they stand a greater chance of actually being elected to the Board of Directors. In other words, the vote for your favorites isn’t diluted.

Lt. Col. Robert Brown of Soldier of Fortune magazine is a long-time NRA Board member who is not afraid of shaking things up. He traditionally publishes a list of his endorsements and this year is no exception. He has endorsed six people for election this year. They are Anthony Colandro, Tom King of the NY State Rifle and Pistol Assn, Adam Kraut, Willes Lee, former NRA President Jim Porter, and Dwight Van Horn. I think it is interesting to note the Lt. Col. Brown has endorsed the two candidates overlooked by the Nominating Committee – Adam Kraut and Anthony Colandro.

The hunting and conservation organization Safari Club International has endorsed Paul Babaz for the Board of Directors. Given he is their current president this is not surprising and should be expected. Babaz was appointed to the Board last year to fill an empty position and is up for election this year.

David Codrea is a journalist and blogger whom I greatly respect. He and the late Mike Vanderboegh were the ones who first brought the BATFE’s gun walking to light. Their articles on Project Gunwalker aka Operation Fast and Furious exposed the plan that ultimately led to congressional hearings and a finding of contempt for former Attorney General Eric Holder. David has endorsed only one person for the Board – Anthony Colandro – based upon his answer’s to David’s hard-hitting questionnaire.

Ammoland.com has been instrumental in collating a number of candidate statements and endorsements. In addition, they have asked that you consider both Anthony Colandro and Adam Kraut for the Board.

Knife Rights traditionally doesn’t make endorsements for the NRA Board of Directors. However, this year they are endorsing a few individuals running for the Board who also serve on their Advisory Board. They sent this out in an email on Jan 31st. The people they endorsed are Sandra Froman, Lt Col. Ollie North, Pete Brownell, Anthony Colandro, Esther Schneider, and Paul Babaz.

My friend Amanda Suffecool of Eye on the Target Radio is bullet voting for Willes Lee. On her ballot she also highlighted Ted Nugent, Oliver North, and Allen West as people she would endorse.

Rock Island Auctions is endorsing their president Kevin Hogan for the Board of Directors. The endorsement points out that in addition to being a collector, he has raised $2.1 million for NRA-ILA.

Lt. Col. Willes Lee has too many endorsements to count. Included in his list of endorsements are Alan Gottlieb of the Second Amendment Foundation, Maj Toure of Black Guns Matter, Kenn Blanchard, the Virginia Shooting Sports Association, and many others. You can find all of them on his Facebook photo page.

Of all the people issuing endorsements and recommendations, the one I examine most closely is that from Jeff Knox and the Firearms Coalition. I say this because I trust Jeff’s judgment, I recognize his unparalleled institutional memory regarding the NRA, NRA-ILA, and the Cincinnati Revolt, and because I think he truly loves both the NRA and the Second Amendment and he is willing to fight for both. Jeff has endorsed both Adam Kraut and Anthony Colandro for the Board. He goes on to say that he would give consideration to Mark Vaughan, Mark Geist, and Mark Robinson.


I think all of these guys would probably be good additions to the Board, but it is very unlikely that all 5 can win seats, and every vote for one of them, reduces the likelihood of the others winning. It’s something of a conundrum, and there’s no simple solution.


Personally, I am going to cast a Bullet Vote with only Adam Kraut’s name marked.

As for myself, I’ll start by saying that I’ve long held that 90% of life is just showing up. Ted Nugent, Karl Malone, and Marion Hammer have not attended one BOD meeting to the best of my knowledge since winning election to the Board. I find that reprehensible. You either serve and show up or you resign. I don’t care if the reason for not showing up is due to a health issue, a family issue, or a prior commitment. Running for the NRA Board was a promise that you would serve and these people failed.

I’ve never been keen on the celebrities on the Board with the exception of R. Lee Ermey who took the role of serving on the Board seriously. The same goes for former politicians. I’d make allowances for Rep. Don Young (R-AK) as he is still in Congress and still carries weight.

People whom I consider worthy of your vote include Sandy Froman, Pete Brownell, Willes Lee (whom I consider a personal friend), and Adam Kraut (whom I also consider a personal friend). Mark Robinson of my hometown of Greensboro would also be worth your consideration. My fear with Mark is that he is a newbie to the defense of the Second Amendment and was nominated due to “optics”. However, I don’t doubt his sincerity in the least.

I think Sandy Froman, Pete Brownell, and Willes Lee have enough backing to get re-elected without my vote. I fear the same cannot be said of Adam Kraut and for that reason I will be bullet voting for him. I hope my friend Willes will understand. 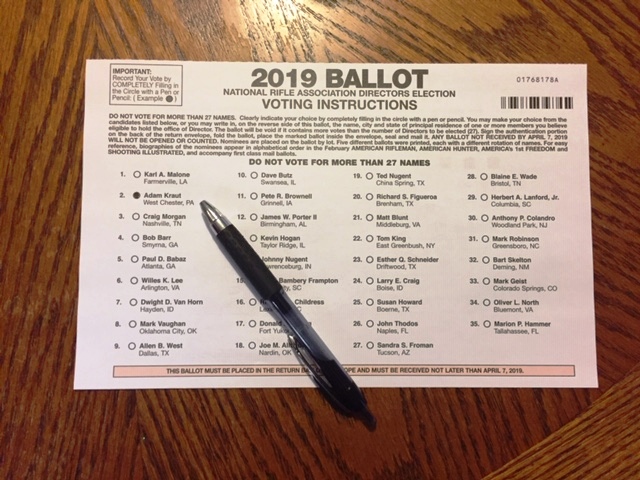 Change needs to come to the NRA or we will have lost all we have won in the last few decades. I see the gun prohibitionists getting stronger, better organized, and certainly better funded. Their misleading messages are repeated daily by the mass media. In an era of changing demographics, they are doing a better job of targeting women and suburban voters as well as the younger voters. If the NRA doesn’t return to its Second Amendment roots and leave the broader social conservative commentary to other organizations, we will lose.

I think Adam is the change that the organization needs.